on December 31, 2016
Happy 2017!!
A week back, we saw a great travelling deal, which was marketed by Garuda Airlines, many travel bloggers and travelling sites as the "Best Deal Of The Year" with unbelievable mileage redemption for their tickets. In fact, many were discussing if the airline would really honor this deal. We have the answer to all those speculations... 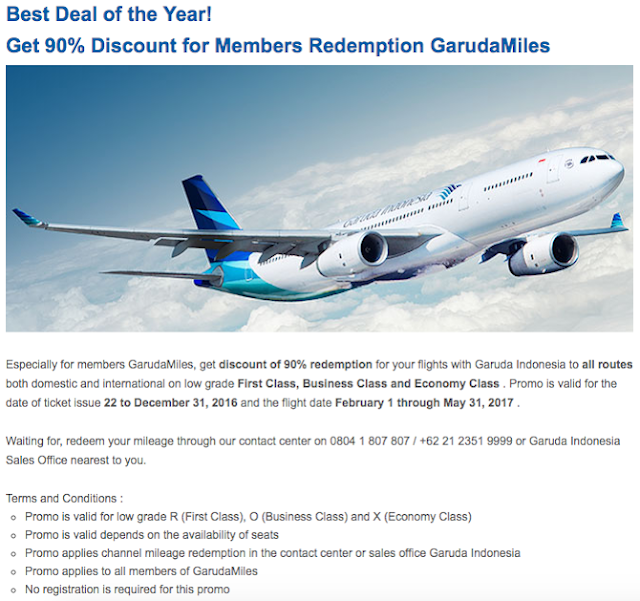 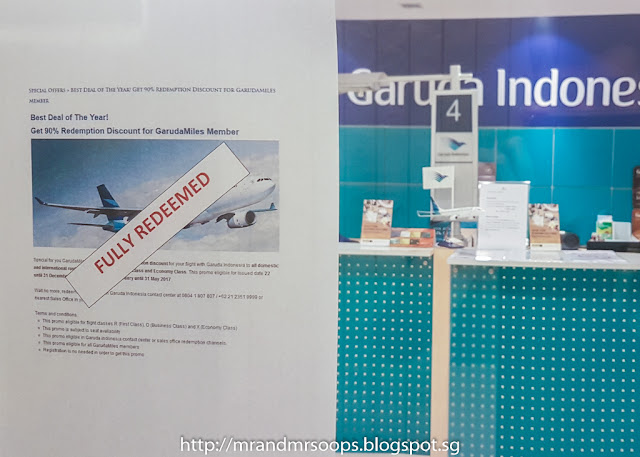 Marketing Gimmick and Unbelievable? Guess what?
Mr and Mrs OOPS got 2 of those tickets!

What tickets did we get?

Considerations we face before we secure these tickets:

1) Is it a SCAM?
We cannot deny that this is our first thought because sometimes when something is too good to be true, it usually is. So fact proven, it's not a scam.

2) There can only be ONE First Class ticket redemption and ONE Business Class ticket redemption per flight sector.
Which means, as a couple we can't sit side by side and we will have to go to different lounges in accordance to our ticket class. It is not a bad idea because besides good savings, we get to experience the airline in various classes.

3) We need sufficient Garuda Frequent Flyer (GFF) miles in order to claim the deal.
-The only credit cards with a mileage program that allows us to convert our points to GFF miles is Citibank. The suggested waiting period on Citibank website for points to be converted to our GFF account is 14 days. We did the transfer on 25th December 2016 and the points were in our system on 27th December 2016. (thankfully)
-We did not have sufficient GFF miles after adding up the conversion of points from our credit card spending and the 1000 free miles for new sign up for Garuda members, We needed another 3000 miles. Miles could be purchased from Garuda at US$30 per 1000 miles.

4) We have to go down personally to Garuda Airline's head office in Singapore ( located at United Square ) to complete the transaction by 30th December 2016 to secure the deal.
And its was closed on public holidays and open during office hours.

5) Redeeming premium cabin (first or business class seats) will maximize the value of our mileage claim.
Besides just looking into redeeming a good offer, we look at the type of plane, number of hours on flight, prices of original flight and the incentives that come with the flight. The long haul flight from Singapore to Amsterdam and from London back to Jakarta will allow us a full experience of the airline's service.

So just like every other Kia-Si Singaporeans out there, we were skeptical about the safety of Garuda Airlines. This airline was once blacklisted by many as the airline who was banned to fly in the European Union. This is also the airline which had history of air crashes. However, the airlines had made numerous efforts to buff up its notorious branding. In the Singapore Airshow 2016, Garuda Indonesia was announced as a 5 star Airline by Skytrax. This is their second consecutive year attaining this award. Skytrax is an independent global airline rating agency which ranks airlines, airports, lounges and airplanes on a scale to help travellers make informed choices. Check out Garuda Indonesia's statistics on Skytrax website. These statistics are comparable to Singapore Airlines. 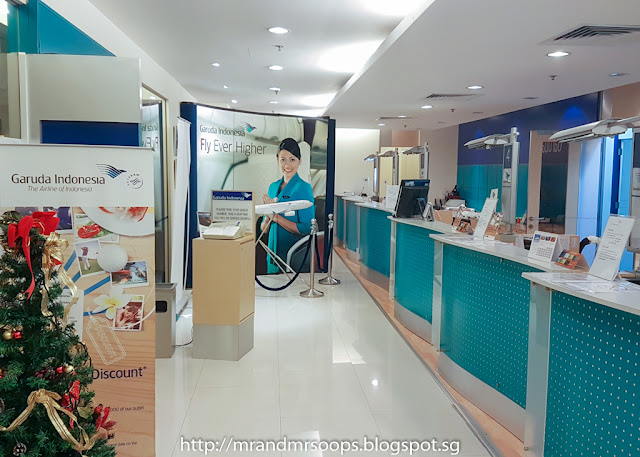 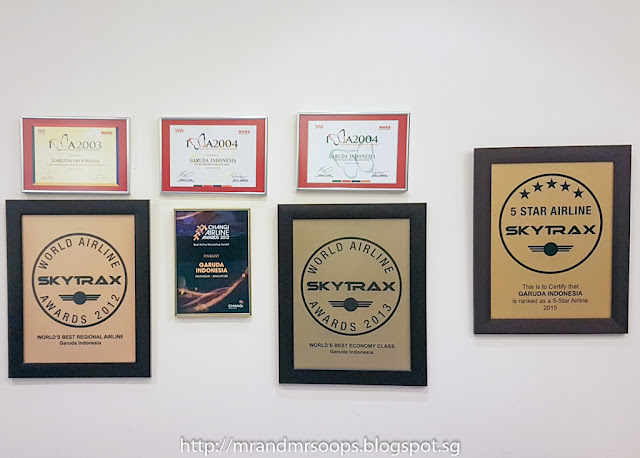 What are we expecting on the flight?

We have been reading first hand reviews of travellers who have been onboard this flight route. So far, the reviews are complimenting the highly-raved service by the service crew. We are also looking forward to visiting the different lounges at the various airports.

Note: Information are accurate as of 2016 and may be subjected to changes within the country. All photos are credited to Mr and Mrs OOPS. Follow @mrandmrsoops and @djoops on Instagram for more instant updates. Not sponsored or affiliated. 过大礼 Guo Da Li : All you need to know about Betrothal Gifts

There are just so many different school of thoughts when it comes to 过大礼 (Guo Da Li). In fact Mr Oops and myself were clueless right from the start. It was through reading and understanding before we finally come to an agreement on the type of betrothal ceremony we want. Our Guo Da Li First up, I respect the intention of having of a betrothal ceremony. But the most annoying thing about preparing betrothal gifts is the massive number of items required for a "complete" ceremony. That sure gets on one's nerves. If you want to have a better understanding of the betrothal gifts and the meaning of each individual item (specifically for the Teochews and Hokkiens), I feel that  this website by topphotography.com.sg  offers the best knowledge thus far. So do hop over to this website if you want the full complete list. For this post, I'm not going to repeat what many other websites have been saying. I am here to relook at some prominent items in the betrothal g 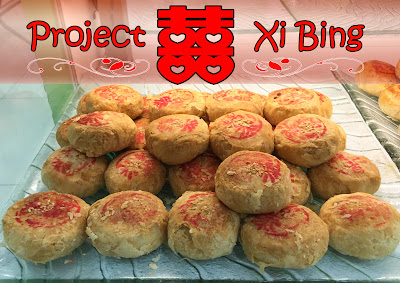 Introduction: Project Xi Bing (wedding biscuits aka wedding cakes) is an initiative by Mrs To-Be-OOPS (which is me!) when it's time to scout for her own wedding xi bings. As there are too many choices when it comes to xi bing, I decided to focus mine on Teochew xi bings. I strongly believe that every cultural wedding traditions and customs are there for a reason. For the Teochews, the little round bean paste pastries (aka dou sha bings) and assorted sweets are given because it symbolises 圆圆满满 (perfect and successful marriage) and 甜甜蜜蜜 (sweet marriage). They are often packed nicely and distributed to relatives and friends. I tried googling on the internet for reviews but they were quite limited. On the other hand, my fiance's parents prefer the old school buttercream cakes. 2 very different types of wedding cakes! As such, my aim is to source around Singapore for xi bing with the BEST DEAL .  What will make up the BEST DEAL? My reviews will be based on 4 main criteri 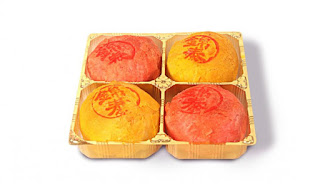 Research On Our Wedding Biscuits aka Xi Bing For Guo Da Li!!

I'm so excited! It's about 3 more months to our big day!  So if you are wondering what is our next step, we are currently looking at options to purchase the Wedding Biscuits a.k.a Xi Bing ( 喜饼)  which will be given during our Guo Da Li ( 过大礼).  Why do we need to prepare Xi Bings? . Here's 3 important things you need to know about giving and receiving your xi bings. They are presented to the bride's family by the groom's family during Guo Da Li. They are symbols of appreciation from the groom's family to the bride's family for raising and taking good care of their daughter. They (usually in boxes) will be distributed to family members, together with the wedding invitation card, as a way to announce the upcoming wedding. Which Xi Bing should we buy? The answer to this question is basically another question. "What kind of dialect group does your partner and yourself belongs to?" Haha.  F or traditional wedding cakes, I will be c